Rotational speed at the equator

You stick your head out of a car going 100 km/h, and you feel the wind. Yet, the equator is rotating at 1,200 km/h and you don't feel a thing? Why doesn't a plane fly faster when it is flying in a westward direction that is against the rotation of the Earth? Why doesn't the centrifugal force throw everyone into space from the equator?

These are again seemingly logical questions: if we are truly rotating with a speed of 1,200 km/h, that's even faster than the speed of sound. Yet we don't feel a thing, and there's no constant superfast wind blowing around the equator.

There are two basic reasons why we don't notice the rotation: gravity that keeps us tightly on the ground, and the fact that everything else is moving along with us at the same speed. Therefore all we see is our relative speeds against other objects that appear stationary to us, as they are part of the same reference of collective movement.

A commercial jet is a great analogy here: when you are on board a plane, it is constantly moving forward with a speed of some 900 km/h, yet your walk to the toilet in the aft of the plane is no different from your walk back to your seat. This is simply due to the fact that everything around you is having the same forward motion, and there is no wind because the air inside the plane is kept contained within the hull of the plane.

Earth is huge when compared to the the human scale. This vast lump of mass creates gravity that pulls everything towards the center of the globe, and therefore it does not matter where on Earth we are standing on, we always feel the pull straight down. Yes, the Australians do walk head down all day long, but that's only relative to anyone living on the northern hemisphere: from the point of view of the Australians, the guys in France are the ones hanging head down.

Gravity affects everything, even the molecules in the air, however light they may individually be. Due to this pull the air around us is also rotating along with us, and we don't feel any wind. In a way, the force of gravity does the same job as the hull of an airplane does for the air inside the plane: locking it up to the same reference as the passengers.

Any airplane is always moving against the air mass around it, and hence the fact that the Earth is rotating below it does not matter: the air mass is rotating as well, and the movements of the airplane are relative against this context. Naturally, when the plane was on the ground before takeoff, it was having the same 1,200 km/h movement as every other object: the fact that the wheels are no longer touching the ground is not making any difference in that frame of reference.

There is one easily observable effect that is different while planes are flying in a westerly direction: as the plane is flying with an approximate speed of 900 km/h and the Earth is rotating with a speed of 1,200 km/h, flying west will lengthen your day as you are chasing the Sun. Flying east naturally has the opposite effect: time zones pass by much faster while flying eastwards.

If you are on a plane flying west on higher latitudes around sunset, you will see the longest sunset ever: it looks like the Sun is just glued in the horizon, going lower only very, very slowly.

When Concorde was still flying between Europe and the USA, it was possible to arrive at the destination in the US at an earlier time than the departure time was on the same day: the speed of Concorde was faster than the rotational speed of the Earth, so you “caught up with the Sun”. Theoretically you could have the New Year celebration in London, hop on a Concorde, and have another party at Midnight in New York. It would be a stretch, but in theory it could have been done.

As for the centrifugal force on the equator, it actually does exist, but its effect is calculated in grams. So you have an easy way of immediately losing weight by moving to the equator, but the results you would see on a scale are dismally small.

All in all, all movement is always relative, and if your surroundings are traveling with the same speed and direction, you don't know whether you are stationary or doing 100,000 km/h. And thanks to gravity, we are all on the same, tightly coupled relative framework. 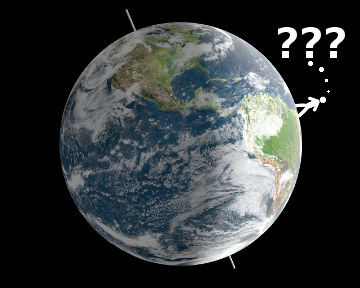 Gravity is stronger than the centrifugal force caused by Earth's rotation. Much, much stronger.

Next: Lifting stuff out of context.