The Ancient Greeks figured out that our planet was round over 2,000 years ago. Columbus and Magellan launched their expeditions based on this knowledge. Millions of airline passengers are carried safely to their destinations daily, thanks to guidance from navigation systems that calculate routes with the assumption that we move over a spherical Earth.

Despite this, there are now international conferences at which Flat Earthers apparently in all seriousness discuss their alternate view of our universe. Even some celebrities have caught on to this new-found fad for flatness, and the Internet is full of slick material proclaiming the “proof” of a pancake-like world.

Under this barrage of superficially believable material, it’s understandable that even those of us who should know better may be tempted to “think different”.

Flat Out Wrong: The Overwhelming Evidence Against Flat Earth is a practical and entertaining look at all the evidence pointing to a round planet. It includes examples of simple and often-overlooked phenomena, which you can personally observe. The storyline is supported by 50 illustrations and images, and additional material is made available on the Internet. It’s everything you need to recognize what the Greeks worked out centuries ago, and why it is so easy to fall under the spell of flatness.

Petri Launiainen unintentionally stumbled on the growing fad of Flat Earth while researching his earlier book, A Brief History of Everything Wireless: How Invisible Waves Have Changed the World. As a Private Pilot with Instrument Rating, he has the real-world experience to know that Earth is a globe, yet he understands that the immense size of our planet can make things look flat. So he collected all those subtle hints about roundness in this book, reflecting them against the claims of the flat Earth model. The reader can then decide which model actually fits the reality around us. 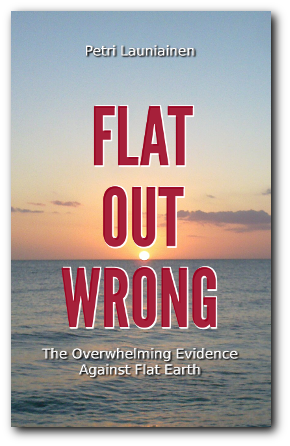