There's a canal in England. A very long one. A bet was made between two gentlemen. One lost and did not pay. So there was actually only one gentleman in this case. And in the end, the story turned really ugly. Not unlike some of the discussions in today's Internet...

Samuel Rowbotham, the author of Zetetic Astronomy: Earth Not a Globe, had been doing his own experiments on the Old Bedford River in Cambridgeshire, England. This artificial canal has a perfectly straight 10-kilometer stretch that starts from a bridge in Welney, and at the end of this run of water is another bridge made out of bricks.

10 kilometers is long enough to indicate any curvature, but Rowbotham was not able to find any while doing his own tests. This convinced him even more of his idea that the Earth is flat. However, it appears that he had not taken into account the strong refraction that is prominent near to a surface of water, and this very common phenomenon had led him into wrong conclusions.

But having done all these experiments, he promoted a wager of 500 pounds if someone could prove that the Earth actually is curved. He did not put his own money in the play: instead he managed to find another person, John Hampden, who was willing to fork out money for the prize.

The advertisement for this wager was seen by a surveyor called Alfred Wallace, who, thanks to his profession, was more than well-aware of the true shape of the Earth. Wallace read Rowbotham's book and found a lot of basic errors in it, as he understood the effects of refraction. So he made his willingness to take this “easy money” known, and devised a test that counteracted any refraction-based errors: he used a marker pole that was raised several meters above the surface of the water, so that the refraction at water level would not matter.

The setup was as follows:

A black marker line was set up on the face of the bridge at the end of the 10-kilometer run, matching the height of the top of the Welney bridge at the other end. A telescope was set up on the Welney bridge to match the height of the marker line. Thus the marker at the end of the run and the telescope at Welney were on exactly the same distance from the surface of the water, the surface of which was naturally expected to be on constant level at both ends of the totally unobstructed stretch.

A pole with two round red markers was installed halfway down the canal: the higher marker was again measured to match the height of the marker line at the end of the run, and another marker was attached about one meter below it on the same pole.

If the Earth was flat, the top marker on the pole should be exactly on the same height as the marker line on the bridge at the end of the run, and thus they should appear aligned when looked through a telescope that was also set to the same height. If, however, the Earth was curved, the top marker on the pole should appear to reside over the marker line, as the middle part of this stretch would be on a higher ground.

All these installations were duly done, the various heights were checked and double-checked in the presence of referees and Hampden, and the setup was finally approved by all parties.

Looking through the telescope, there was no question about the result: not only the top marker on the pole, but also the lower one was clearly over the black marker line at the end of the run. What a surveyor knew simply due to his day job was true: the surface of the Earth was curved.

The drawing out the outcome is shown in the adjoining figure.

But instead of accepting the loss and forking out the money, Hampden went ga-ga: first he claimed that there was an issue with the telescope and its setup, so another one was brought in, but the results were still the same. Referees agreed, and the setup was even inverted so that the observation was done from the Old Bedford bridge towards Welney bridge. Still the same result.

Hampden was not satisfied and demanded to get his money back, which had so far only been given for a referee for safekeeping. The case was taken to court, but the court decided that the money still belonged to Hampden as it was never given to Wallace, and the unfortunate fact that there was no written agreement totally muddied the case from a legal point of view. It was word against word at this point.

Wallace probably thought that it was better just walk away and stop fighting, but Hampden was not even close of being done with this case: during the next 16 years he repeatedly defamed Wallace as well as one of the referees, send death threats to Wallace's wife, and ended up getting jailed at least four times. He also lost the case in court and was sentenced to pay the prize money, but he had transferred all his assets to his relatives so that he had no money to pay, forcing Wallace and some of the litigated referees to cover the costs of court proceedings. This continuous harassment by Hampden only ended after he died.

Wallace had thought that he could make an easy 500 quid. In the end, after all the court costs, he ended paying much more than that in the process. He had entered a wager expecting just to state the obvious: no surveyor can produce accurate results if the curvature of the Earth is not taken into account for any work that spans distances of several kilometers, so he was sure of his case. But by not having a proper agreement in place to start with, the whole case went off the rails fast. 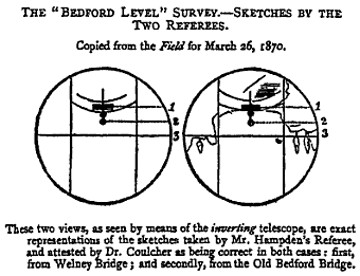 The impartial referees' drawing shows the effect of curvature.